Katarina Šević and Gergely László (member of the collective Tehnica Schweiz) have worked together on several occasions. They realize their projects through groups of objects, accompanied by performative situations and events, combined usually with text and narration. They are propelled by the surrounding social dichotomies of today, and their artistic methodologies are based on complex working processes with the occasional use of archived documents. They are interested in alternative formulas of knowledge and their works carry critical and political potential.

In their work they explore how different voices can coexist, using stories of conflicts between society and the individual. Their performances experiment with stylized formats using traditions as diverse as tableaux vivants, commedy, ancient chorus, or amateur sketches, in which characters take symbolic roles. 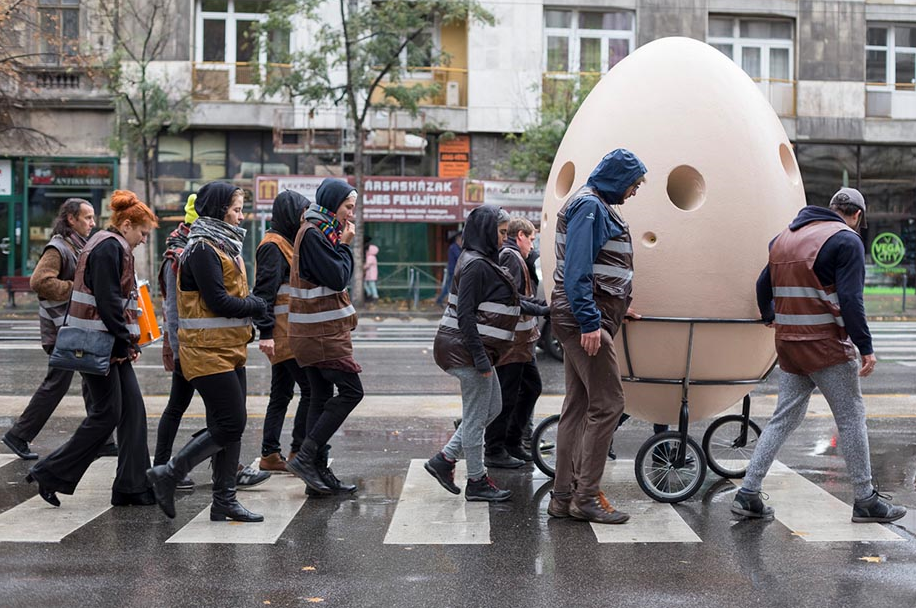 Katarina Šević i Gergely László – Opomena © All rights belong to the artist.

Both artists exhibited internationally in solo and group shows including:

By using tools related to the various traditions and forms of street-theater, such as grotesque and humor, the performance aims to celebrate freedom of expression and fearlessness, acting against a general mood of political and civic frustration and passivity.

Stummer Diener (2013-2014) is an object and at once a device for continuous performative acts, with seven participants forming a chorus. The chorus stand in a circle around the object and ritually repeat selected parts from the exhibited books in form of admonitions in a given order, again and again. The piece is based on the 1958 drama by Max Frisch, Biedermann und die Brandstifter (The Arsonists). The appropriated texts are quotations from the play: seven chosen admonitions of the firemen, a chorus of seven who expect a disaster to happen and only have the means to give warnings, but not to extinguish the fire.

The form, the proportions, materials and color of the object – in other words design – , as well as the title of this piece, Stummer Diener (translates to mute servant), come from the type of furniture that became popular in homes of the expanding middle class during the Biedermeier period. Stummer Diener is a reminder of a style, a form of life and a general mood that grew out of the wealth of the bourgeoisie during the process of Restoration under Metternich (1) between 1815, the end of the Napoleonic war and the revolutions of 1848. Though it had its equivalents in England, France or Scandinavia, the term Biedermeier is explicitly used for the style of the Central European region, under German influence at the time. It is therefore a feature that is fundamental to the identity that connects the countries of the region today.

The piece, Stummer Diener cites Frisch, who, in his drama, created a timeless middle class setting, within which the fear of change, hypocrisy and short-sightedness blocks the voice of reason. The only reference to a specific historical epoch that is hidden in the title of the play Biedermann und die Brandstifter (2), points our attention to a state of ignorance and passivity amongst the empowered segment of society that first unfolds during the Biedermeier period, the state continuously renewed and sustained in the cycle of revolutions and restorations until our days. Stummer Diener is therefore now applicable in any civic environment, Berlin as well as Budapest, Vienna or Novi Sad, as it is a testimony of the Biedermeier era that never ended.

“Šević and László have used different kinds of stages and ways of performing in their earlier works, but up until The Curfew (2017), never the street. Here the street becomes the stage where a theatrical, performative format originating in the grotesque and the grammelot is re-performed, so that those historical references are dominating over the aesthetic and artistic character of the project.” (3)

The street play – a performance organized on the streets of Budapest (4) – The Curfew is an alternative form of public demonstration. A troupe roves the streets of Budapest. They push in front of them a three-meter high egg-shaped, multiplayer megaphone. They stop at busy public squares to perform their play as a speaking choir about the transfiguration of a group of security guards. They are helped by the magical talking egg in which the voices are reborn and amplified. By using tools related to the various traditions and forms of street-theater, such as grotesque and humor, the performance aims to celebrate freedom of expression and fearlessness, acting against a general mood of political and civic frustration and passivity.

In the play a group, dressed in leather costumes (resembling security wests), patrols various public squares, looks for loud individuals (wearing leather masks) and silences each of them in a grotesque manner, symbolizing power. Suddenly they notice a strange object of the higher order, a huge Egg, and discover it transforms and amplifies their thoughts and voices. Using the Egg, they tell the story of their self-reflection and transformation. “It is this part of reality, which can only come true in a play, in a fairy tale, in a commedia.” (5). Through the form of a speaking choir they recite the text (poem) written specifically for The Curfew by contemporary poet and writer Krisztián Peer. The text was arranged as a fugue by composer Dóra Halas, so many layers of text are spoken in parallel voices.

“The Curfew is strictly choreographed, it has clear historical references to the tradition of Commedia dell’arte, showing the tragic in humorous and grotesque forms, using the topoi of the “mask” and the “costume” and going back all the way from the theatre of the classical tradition, through the Renaissance up till today and presenting an iconographically heavily loaded motif – the Egg – in a new shape and a new form.”

(1) Klemens Menzel von Metternich was the Austrian Minister of Foreing Affairs between 1808 and 1848. Under his supervision the Decree of Karlsbad (1819) was conducted that formulated a program to control movements of nationalism and liberalism in the territories of the German Confederation (Deutsche Bund), a confederation of German speaking countries that encompassed a territory we may today refer to as Central Europe.
(2) The word bieder is a German adjective (that was used mostly during the 19th century), mocking the common and boring life of the petite bourgeoisie.
(3) Kata Krasznohorkai, Marching on the streets is saying it – only louder! Archive Journal, January-February 2018, Archive Kabinett, Berlin.
(4) The project was realized in the framework of OFF-Biennale Budapest in the autumn of 2017.
(5) Kata Krasznahorkai, op. cit.

Exhibition is realized within the scope of the project RISK CHANGE supported by the European Union ‘’Creative Europe’’ programme.