„But geometry – in the traditional way of thinking – is almost always the symbolic order of reason and decorative order of an environment.“

Geometric art, one of the two main branches of abstract art (the other being non-geometric abstraction), has, before the introduction of autonomous and self-referential elements of visual language, such as colors, geometric shape, light, rhythm, and other art elements, gone through a dramatic journey until the appearance of new media artistic practices. A particularity of this expression represents a consistent tautological strategy of its sustainability. Geometric abstraction as an art phenomenon directly explores a relationship between art and science, primarily due to its algorithmic character.

The aim of this exhibition is to show and analyze current incidences in the area of geometric art abstraction in Vojvodina in the past 17 years, as well as to prove that the appearances on Vojvodina art scene after year 2000 do not represent innovations, but rather a constant grounded in global artistic practices. 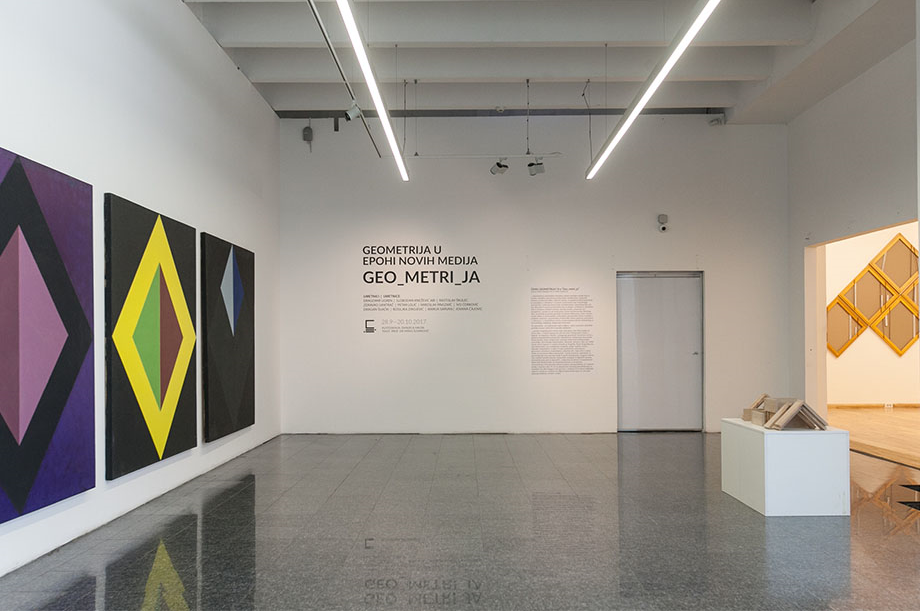 A particular aspect of the exhibition represents a social engagement of the artist and a conservative view which holds that the geometric art in the most radical manner expresses the points of independency of art, but also the points of speech beyond art on all socio-political subjects.

Therefore, in the context of media society permeating all segments of life (and thus also the art), artists manage to maintain their algorithmic stance inside and outside their artwork. Inside, they use the media, abstract forms, while in public appearances they succeed in retaining the principles of social field objectivization.

The exhibition will democratize a rather rigid view of geometrical abstraction in Vojvodina as art practice without political charge, a mere formal social decor. It should prove that small “hibernated” viewpoint of artists of small cultural potential represented an ideal place for geometrical abstraction and creation, and that the consistency of this language represents a rebellion of its own kind.

“… Geometry is a discipline of mathematics that first emerged from measuring land and then developed into a discipline focused on abstract presentation, modelling, and description of space, forms in space, and their relations. In the Western tradition, geometry features in architecture and the visual arts as a methodology of conceiving and realising the composition of a work of architecture or art, as well as in terms of decorative samples (ornamentation) applied in architecture, mimetic painting, and sculpture. The models of symmetry, the golden ratio, proportion, as well as perspective sufficiently developed to form the structural basis of composing a work of painting. Geometry became the grammar of visual design and thereby also the basis of the theory of form. In non-European civilisations, mandala geometric schemes in Indian Tantrism and Islamic geometric ornamentation demonstrate consummate and, in figural as well as semantic terms, highly developed systems of symbolic, i.e. cosmological, magic, and religious expression. But geometry – in the traditional way of thinking – is almost always the symbolic order of reason and decorative order of an environment.”

“…But there is also a different story about why, precisely today, some painters somewhere in this world – and such locations are many, from China to Korea via Tunisia and Nigeria to Argentina and Brazil – resort to geometry. In its global capitalist precarity, flexibility and fluidity of economic tokens, the contemporary world has become a place of insecurity, a feeling of fear caused by the slippage of signifiers and thereby also of traditional and current texts, images, and even forms of life: anything is possible and everything is different all the time. The notion of different is no longer singular but multiplied: different, other, dissimilar, foreign, alien, incomparable, neither mine nor yours, dislocated, removed, generic, simulated, un-rooted, asylum-seeking, etc. And then they – I am referring to contemporary painters of geometry – act as though something pushed them toward geometry. There, geometry is not an expression of measuring land or its transpositions into possible worlds of however many different human bodily, mechanical, analogue or digital measurements. Geometry is an appeal for security, and security is revealed in invariance. Painters seek ideality whereby immanence turns into invariant transcendence and thus generates conditions for the emergence of a human ‘I’ in opposition to land and in opposition to measure. That ‘I’ appears as a realised geometry whose consequence is the imago in a picture, sculpture, or digital screen. The I is I in relation to the visibility of geometry whereby the world reappears as stable, firm, and solid.”